Can we please stop using gas?

The global carbon uptake has been monitored to double from 2.4 ± 0.8 to 5.0 ± 0.9 billion tonnes per year between 1960 and 2010 mainly due to the excessive use of fossil fuel as an energy supply since the industrial revolution (1). In September 2016, climatologists reported a major milestone of the world’s climate where the atmospheric carbon dioxide level passed the 400 parts per million mark (2). Its highest level was recorded in December 2018 at 409.36 parts per million by the National Ocean and Atmospheric Administration (NOAA), US Department of Commerce (3). This has already led to extreme weather conditions in certain parts of the Earth and the degradation of the overall air quality. 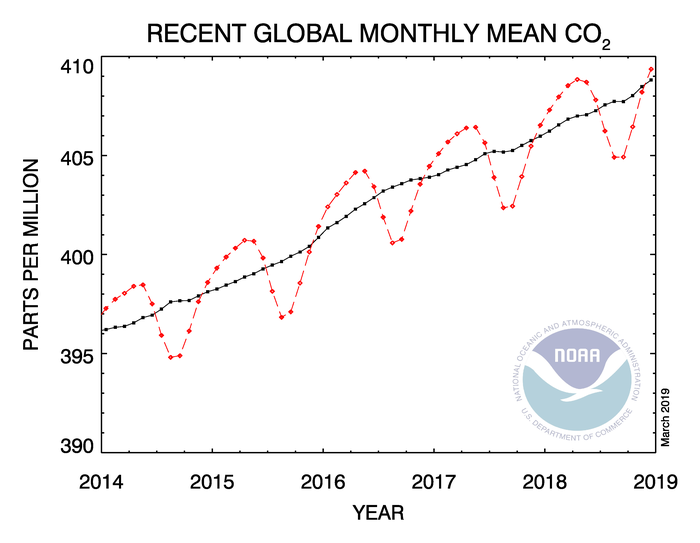 Figure 1: Shows the rising trend of the global monthly mean carbon dioxide level in the atmosphere from 2014 to 2019. Figure 1 was taken from reference (3).

Lithium-ion batteries to the rescue!

Lithium-ion batteries are a step in the right direction towards the scalable energy storage effort. They operate according to the “rocking chair” principle (4) (6) via a process called intercalation (7). The lithium-ions are interchanged between the anode and cathode which are made up of materials that can incorporate (intercalate) the Li-ions into non-occupied lattice sites between the layers of the material. This process also determines the direction of the flow of electrons in the external circuit.

Figure 2: Illustration of the Li-ion cell. During charging an external power source applies a high voltage, which forces a charging current carried by the Li-ions to flow within the battery. The Li-ions move from the cathode to the carbon anode where it is intercalated between the carbon layers. During discharge the Li-ions move to the cathode to be intercalated, while the electrons move towards the cathode in the external circuit providing a discharging current (7). This is the “rocking chair” principle. Taken from ref (7).

Lithium-ion batteries are already heavily used as power sources in electronics such as mobile phones and laptops. Due to their high durability and energy density, they are even being scaled up or connected in series to be used in electric vehicles and as energy storage systems for renewable energy generators such as wind turbines and solar farms (5). While lithium-ion batteries are a well-developed and mature technology, it does have its drawbacks.

For example, lithium ore is costly to extract and refine, and reserves of lithium are finite and quickly depleting (8). Lithium extraction also has negative environmental implications as it often involves draining massive amounts of water which can lead to drought. Furthermore, despite over 25 years of commercialization, lithium-ion batteries still have a lower power density compared to traditional energy sources such as fossil fuel. This is evident in the current development of electric vehicles. To illustrate, a Tesla Model S requires 7104 Li-ion cells to power it and this is an important factor which heavily contributes to the overall price and the weight of the car. However, electric vehicles still suffer from a limited range as compared to vehicles which run on fossil fuel.

Sustainable battery: The future of batteries

As an alternative, efforts to produce sustainable battery technologies such as sodium-ion and potassium-ion batteries have been gaining interest in recent years. There is a rising demand to develop alternative battery technology to replace Li with more environmentally-friendly elements such as sodium (Na) and potassium (K). These elements are some of the most abundant materials on our planet (8). Thus, these materials are favourably poised to make low-cost batteries leading to the production of cheap electric vehicles. It is predicted that if sodium-ion batteries were to replace lithium-ion batteries in daily life, the energy cost could be reduced by 30% while still maintaining greater sustainability (9).

Furthermore, 2D materials such as MXenes and graphenes are also of a topic of interest in the pursuit of greener battery technologies. These materials are sought after for their unique enhanced properties compared to their 3D counterparts, this is a result of their single-atom thickness, high surface area, and electron confinement in two dimensions (4). For example, graphene, the 2D structure of graphite is well documented to possess high mechanical strength (200 times stronger than steel) as well as over 60% higher conductance of heat and electricity than graphite (4). Using 2D materials in energy applications could lead to lightweight yet high-capacity batteries (4).

Efficient batteries are vital for the progress of our civilisation to effectively harness renewable energy and to combat against global warming. I hope the continued research in this field will lead to the commercialization of safe renewable batteries for the further development of inexpensive, long-distance electric vehicles, and storage systems for electricity grids.

One thought on “Can we please stop using gas?”